In this installment of Stringbags we present a couple'a photos from May of 1918 which show a Halberstadt CL.II of Royal Bavarian Schlachtstaffel 27b just prior to a sortie during the Ludendorff Offensive.


In the first photo an armorer is seen loading potato mashers into a rack for use by the observer. Affixed to the spine of the kite, just behind the cockpit, is an assortment of flare cartridges. 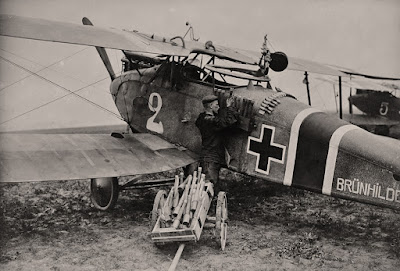 
In this second shot the crew is mounted up and ready for engine start. The inscription on this postcard reads, roughly:

"Schlachststaffel Ready for Takeoff - The aircraft are equipped with machine guns, signal cartridges, and hand grenades."

In the background is another Halberstadt, #5, named 'Thea'. This machine was captured by New Zealand forces after being forced down near Bapaume in late August of 1918. 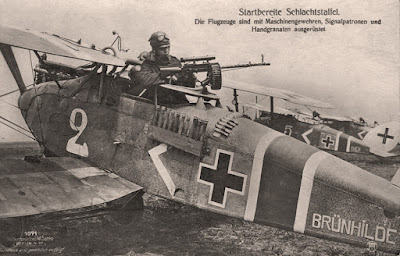 Incoherent rambling by Hawk914 at 5:56 AM No comments: